Many of our devices can be set to sound buzzers based on various conditions such as:

To have a buzzer sound, we need to do 2 things:

What we will cover below is how to set up the output to behave correctly to make a buzzer beep (i.e. beep, beep, beep). This is achieved by having the device toggle an output on/off. If we connected an LED instead of a buzzer - the LED would flash. So this concept can be extended to anything we might want to behave in a pulsing on/off manner.

When we set the device to 'buzz' i.e. buzz on no driver ID - all options we have set up will buzz. So for the G100/G120 - the internal buzzer would sound. If we had an RFID reader also connected that device's buzzer will sound at the same time. We don't need to do any special configuration for 1 or 2, so we will discuss 3. 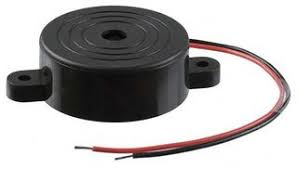 The Dart2, Eagle, Falcon, G62 and G120 have 'Switched Ground' outputs. See: Common Concepts - Digital Outputs and remote output control for more detail. Switched Ground outputs can be thought of as a low side switch. They are high impedance (open circuit, no connection) when off, and provide a path to ground (i.e. close the loop) when on.

The Falcon, G100 and G120 all have Switched power outs, so can be used with buzzers with the opposite settings to below.

So for these inputs, we wire: 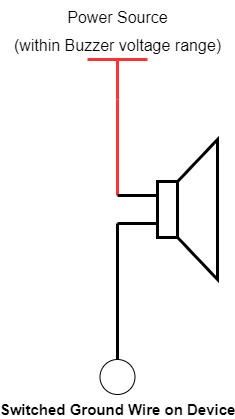 So in this configuration, the buzzer is constantly powered, but the switched ground output going on/off has the effect of connecting and disconnecting the negative terminal to ground.

When the negative terminal is connected to ground (SW GND output on) there is a complete circuit, and the buzzer sounds.

So now, if an event occurs that means the device will buzz (like over speed, or harsh braking) - the output line will pulse on, off, on, off, on, off... - to sound the buzzer.

Some devices have switched power outputs. For example the G100/G120 and Falcon. These are not used as commonly but may have some useful applications and are useful when the switched ground is otherwise being used.

Instead of providing a ground when on, and disconnected when off - these outputs provide a voltage source when on. The G120 will provide 5V at the pin when the switched ground output is on.

In this case, we wire the negative terminal of the buzzer to ground, and the positive side to the Switched Output wire (orange on G120).

Parameter setup is essentially the same, just we use the Switched Power Output tab to control the behaviour of this output.

The Falcon is slightly different. On the Falcon you can use either the Switched Ground Output or the 3.3V Output to control a buzzer. Unlike the wired devices above, the Falcon can only buzz off of a Digital input's activity.

Wiring and configuration is the same as Switched Ground Outputs on Devices, i.e.

If the buzzer can be powered by a 3.3V supply, it is often very convenient to simply use this output already present on the Falcon. Note if we use this while we are powering the device by 3 x AA batteries, excessive buzzing may cause significant battery drain.

Set up would be:

The below Falcon has a 4 core wire which is being used for a reed switch and Buzzer set up.

When the Digital input is changed by the Reed switch the upload is triggered and the buzzer command is sent.

This config has the Switched ground Active High and Default active off with the buzzer power from the 3.3V out.