Our battery powered devices are great for 'slap and track' applications as they do not require any wiring or complicated installation.

How is it done?

Usually, on a hard-wired device - we connect an ignition source to the device to track when the ignition is on via physical input. On battery powered devices, run hour tracking may be achieved by the device using it’s accelerometer to detect movement caused by the vibrations emanating from the asset. These vibrations would start a 'trip' and the device would record the trip duration up until the accelerometer stops detecting movement, after which the device would ‘end’ a trip. The duration of the trip would then be used to accumulate the run hour count. On the server, we can just work out the time between a "End of Trip" and "Start of Trip" log to calculate the run hours. Using the accelerometer to start/end trips means we can even track run hours on stationary assets as well.

The application would require testing on the user's part as the accelerometer wake-up threshold would need to be configured to filter out any wake-ups that may be caused by other factors either than the asset being in operation. Any accelerometer wake-ups from false triggers would lead to inaccuracies in your run hour incrementation. In nearly all cases though, defaults are OK. Provided the trip detection is set up and tested, the run hour accuracy should be reasonable accurate.

Using Jostle Mode To Start A Trip On Cellular Devices

The Yabby Wi-Fi and GPS is always in Jostle Mode by default.

An accurate configuration of the sensitivity of the accelerometer is crucial to ensuring an accurate run hour incrementation. The Wake-Up threshold can be set to a value 1-8 which corresponds to 63mG - 504mG (in 63mG increments). The user would need to test which value is best suited to the asset on which run hours are being tracked.

Usually defaults are fine. If defaults result in too many false wakeups - just set the Wakeup Threshold and Wakeup Count to 2 and 1 as the next test. 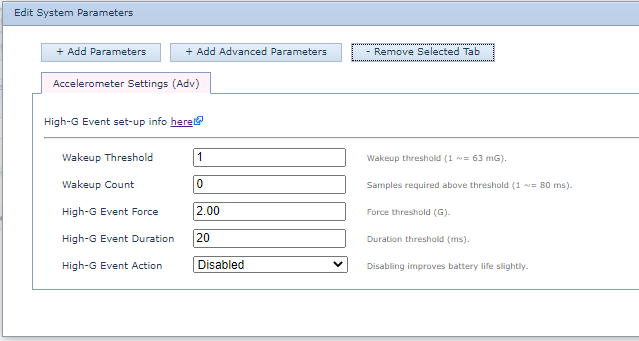 Telematics Guru will automatically calculate run hours for us based on trip times, and display this against the asset. We can enter an initial run hour reading against an asset via Odo/Hours in the menu.