This article serves as a record of what SIMs which Digital Matter have knowledge of working with our products in various countries.

It is not an exhaustive list, and relies purely on the feedback of our partners to help build it. We have better data in the countries where we are more active/have more devices.

Results often change, we have had some providers which initially would not connect, only to find after various updates from 3rd parties (networks, SIM providers, component providers) to have them connect.

The inverse is not as common but also possible. Partners should conduct their own testing

See GSM Arena - Mobile IoT Commercial Launches for an up to date list of current and announced Cat-M1/Nb-IoT networks globally.

This article summarises our current confidence level in the various technologies and SIMs as follows.

This is reflected in our findings below.

In Australia the current preferred option is Telstra's Cat-M1 network, using a SIM card provided by M2M One.

Other roaming SIM cards are available that will work on Telstra's Cat-M1 network. After some initial issues with roaming SIMs on Cat-M1, this appears to have settled down.

We have a very high level of confidence of M2M One's Cat-M1 SIMs that work on the Telstra network.

The other listed SIMs appear to be working well but are not as extensively tested.

No special set up is required - but it helps to restrict the device to Cat-M1 Band 3 and NB-IoT band 28. This will aid in helping the device to join the network faster.

Apply these settings to restrict device to NB-IoT band 28 so it will register faster - the OEM server settings is the DNS workaround. 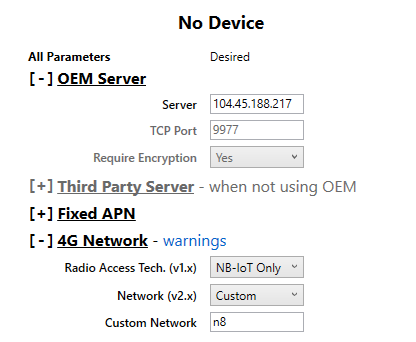 Orange/3 Mobile
NB-IoT is working when the IP is hardcoded. Aiding data downloads fail as the uBlox servers cannot be resolved. Latest FWs have this hardcoded. Pending testing with PCO enabled.

Hologram - NB-IoT is not supported yet. It has been enabled but awaiting further tests

With our confidence levels above in mind, there are some roaming SIMs currently on the market if roaming is required.

Modem and network updates has led to their performance improving dramatically in recent months.

We have seen this SIMs used quite successfully in our 2G and 3G devices.

After some initial hiccups, they are now working well in 4G devices.

Not all countries have been tested by DM. We have seen these SIMs in operation on 4G in Australia, the US, and Spain so far.

Similar results as Emnify - however DM has not heard reports of extensive testing.